The story goes that when in 1946 Eva Peron visited Queen Elizabeth of the United Kingdom, she complimented the queen on her fur coat. Later, the queen sent Evita a small gift. I assume Argentina’s first lady would have been pleased with just a fur coat herself, but Elizabeth chose to send her 25 pairs of Canadian beavers so that Evita could produce her own fur coat, and many of them. This was the start of what now is a terrible disaster. Not knowing what to do with 50 beavers, the government decided to ship them to the faraway and uninhabited Tierra del Fuego. Be it ignorance or stupidity, this mountainous island is a true beavers’ paradise. There’s plenty of water and trees, and even better, no predators! You get the picture…. Today it’s estimated that de island is inhabited by 100.000 to 200.000 beavers. They have been spotted in Chile on the continent, meaning they swam the Magellan Strait. Needless to say Chile is not happy with the invasion.

With the beavers also the number of inhabitants of Tierra del Fuego grew. To restrain the growing numbers of beavers, a price was set for every beaver tail handed in by the public. However, despite this, the campaign was not very successful, as believed due to the fact that the newcomers came from the city and were not familiar with hunting. By now, beavers are a huge plague, possibly outnumbering the total number of 140.000 inhabitants of the island of Tierra del Fuego.

And so the beavers continue to undauntedly create their engineer empires, nibbling the fragile Fuegian forests. Building their homes and dams, they flood the land and the trees which as a result, die. Taking down the big trees to get to the branches and fresh leaves, they expose the smaller, young trees to wind and snow. Beavers are unstoppable workers, daily doing maintenance or expanding their terrain. A rare and very close encounter with a beaver

I have visited and seen many beaver lodges and lakes near to roads and down in valleys, but also unexpectedly high in the mountains. The combination of wild nature, dead trees, unprecedented engineer construction and a magnificent backdrop of mountains makes for a beautiful photo setting. As beavers have impaired sight, they miss the spectacular scene.

Some more images and examples of beaver habitat around Tierra del Fuego island. 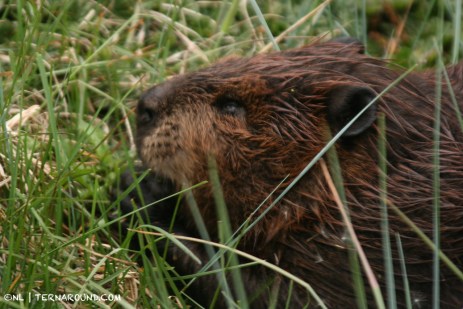 A rare and very close encounter with a beaver Dead trees in a lake created by beavers… destructive and picturesque 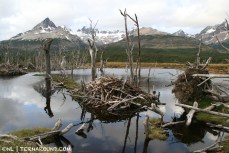 Typical view of a beaver habitat with dead trees and trunks 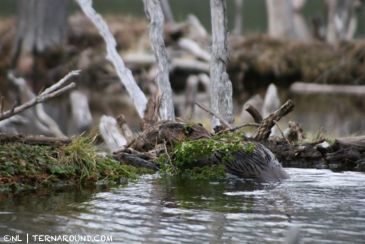 Beaver carrying a branch, crossing from one pool to the next Still standing: tree gnawed by beavers and burned by fire 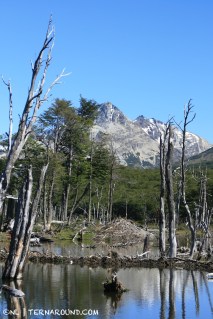 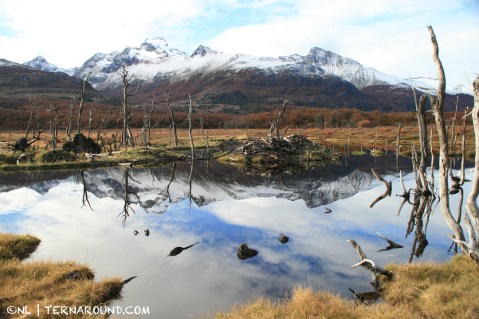